Johnny Raincloud’s new video, White Noize, is one of those videos that you really want to watch, but then feel guilty for watching it. The song is all about how we are too dependent as a society on our phones, the internet, the white noise in our lives, and we don’t foster relationships like we used to. We have become addicted (foreshadowing, if you’re paying attention) to our devices, and Mike Stortz, the brain behind Johnny Raincloud, wants us to know that it is having detrimental effects on our society and our psyche.

Glued to their screens
Everybody drowns,
And they can’t see
Because they’re looking down

Now, the lyrics may be off by a word or two (or ten, let me know JR, and I can fix them) because I couldn’t find them written out anywhere, but the point is abundantly clear. As someone who just had to change the way that I work on the computer because of neck problems, I can absolutely relate to this. I know it isn’t quite what they’re talking about here, but that’s the beauty of music. It belongs to everyone once it’s put into circulation… ya know… except for the actual song itself and the copyrights and whatnot, but you know what I mean. 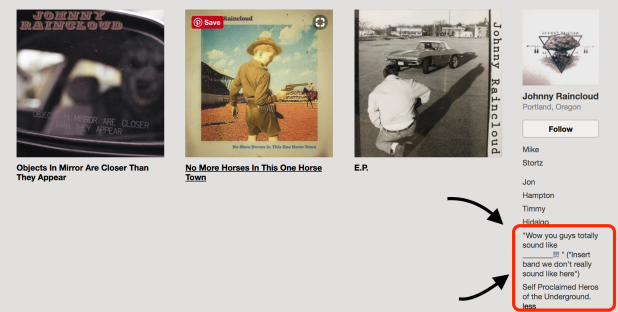 Disclaimer: This part is where I compare Johnny Raincloud to another band.
I noticed on the band’s Bandcamp page that they make take offense to me saying they sound like anyone, but I’m going to go ahead and make a comparison. This Portland, Oregon trio sounds like another PNW band that everyone is familiar with: Modest Mouse. Now hear me out. I’m not talking about “We Were Dead Before the Ship Even Sank,” hell, I’m not even talking about “Good News for People Who Love Bad News” (Although I wouldn’t say you’re wrong if you made a case for how Good News has similarities). I’m thinking they are an updated version of “The Lonesome Crowded West.” I mean, at that time Modest Mouse was a three piece set as well. Stortz and Isaac Brock have a similar off beat cadence when they sing, and can easily find themselves talking to you or yelling at you in the same measure. The guitar slides around the whammy bar before hitting you with staccato punches, and the bass and drum act as the glue to keep the vocals and lead grounded in something that isn’t too outlandish. I’m sorry if you guys don’t think people’s comparisons are accurate, but when I hear this song, it makes me want to listen to Convenient Parking. They have the cleaner production value like when Modest Mouse broke out, but they still keep that raw power alive that I loved from the earlier stuff. Take the compliment, guys. I really dig your stuff.

Fun fact about the video: They only used one 50 foot roll of film for their Super 8 to make the entire video, and the full project cost $40 to make.